We are interested in following the reorganization of atoms and elections as materials undergo change in state, through reactions, translations, or transitions. Under a recently awarded Knut and Alice Wallenberg Foundation (KAW) infrastructure project we will construct the first UEM, also called dynamic TEM, in Sweden. The instrument will facilitate the recording of “movies” of the motion of atoms as they are in transition.

After its invention by Ruska in the 1930s, the electron microscope has become an indispensable tool in almost all physical sciences including biology. A state of the art transmission electron microscope (TEM) facilitates studies of static matter with atomic level detail. However, until recently it has not been possible to follow at the same atomic level how changes in state of matter, through reactions, translations, or transitions, occur. Under a recently awarded Knut and Alice Wallenberg Foundation (KAW) infrastructure project we have built the first UEM, also called dynamic TEM, in Sweden. With the instrument "movies" following the motion of atoms as they are in transition amy be created. Since chemistry take place by a reorganization of atomic positions over Ångström length scales at roughly km/s velocity processes are often completed at the femto- or picosecond time scales. Following atoms during the short path travelled at this velocity put high demands on a microscope. It must be able to capture images with a comparable, femtosecond, time resolution.

In a UEM operating in stroboscopic mode a femtosecond laser pulse is steered into a modified column of a TEM and directed onto the cathode to generate a few electrons ultra-short electron pulse through a photoemission process. The femtosecond electron pulse travels through the column to the sample. A second laser pulse (from the same source) is directed through an adjustable optical path towards the sample to initiate the desired change in state (chemical reaction, phase transition, mechanical motion, etc.), thus enabling a temporal reference point (time zero) for the changes that occur. By fine-tuning, at the femtosecond time scale, the relative arrival time of the laser pulse (pump or clocking pulse) and electron pulse (probe pulse), a series of micrographs (or diffraction patterns) can be recorded during the process of change in state (Figure 1) and information on many aspects of its dynamic or transient properties can be obtained. The UEM in this design can produce sub nm resolution in conventional microscopy, a precision of a few thousandths of an Ångström in diffraction mode, and that with a time resolution of a few hundred femtoseconds. This is 10 orders of magnitude better than conventional microscopes, which are limited by the video-camera rate of recording. 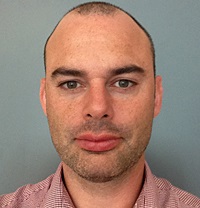